As those who have followed Shelby’s antics know, Shelby assumed residency of my bathroom about three days after her amputation.  At first it was kind of funny – she would just hang out in there but then she got aggressive with it. She refused to leave (even trying to coax her out with a cookie, she would grab the cookie and take it to the bathroom). My bathroom is tiny – just enough room for one person in there – let alone add a small dog! Since she refused to leave if I went in there, I would have to straddle her and the toilet to potty. I would have to lean over her to apply my make-up or brush my teeth. It was her ‘den’ and she wasn’t budging. I called the vets (they assured me while they had never heard of this, it wasn’t hurting her to ‘hang’ in there). My friends figured perhaps she had made it her ‘safe place’ for her recovery.

Two weeks into our recovery, she was still hanging in the bathroom and getting increasingly annoyed if I needed to get in there. I tried moving the purple bath mat that she loved to sit on to my bedroom to coax her to sleep in there – she just stood and stared at me until I put it back in the bathroom. One night, I decided to do a load of wash and washed the towels, including the bath mat. She was beyond upset. She couldn’t figure out where her beloved mat was and she kept going back to the bathroom to check and see if it had magically appeared. That was the same night our washing machine went wonky and almost didn’t work (God forbid the bath mat not get rinsed of it’s soap and put in the dryer). I tried to put a blanket in there to soothe her but she would have none of it. It had to be the bath mat in the bathroom.

Somewhere around week 4 or 5, I noticed she was spending less overall time in the bathroom. I had gotten so used to seeing her in there, I lost track of the time. When I would go to bed at night, she would have already tucked herself into bed in the bathroom. I would walk past and tell her goodnight (thinking if I stopped acting stressed about it, she would come out). One morning I came home from a run and she was on her bed – in the living room. The joy in my voice could be heard throughout the entire apt complex! Praise God – she’s out of the bathroom (she was back in it that night). 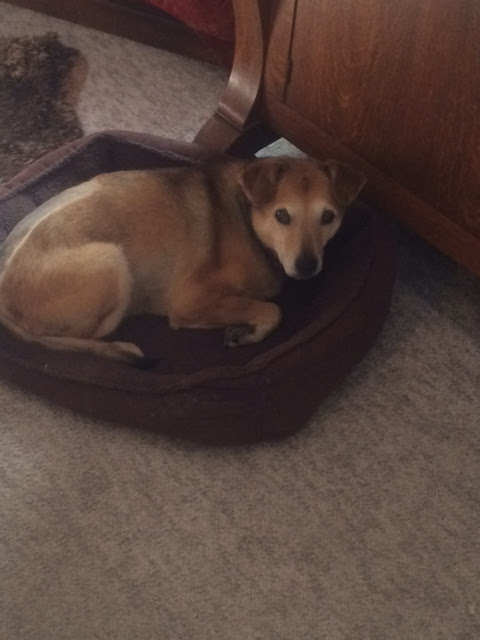 Slowly, she started to spend less time in there and more time in the living room and at the doorway to my bedroom. Never spending the entire night though. Then we had a breakthrough. Almost 5 weeks post-amp, she spent the night in my bedroom on her bed. I almost stepped on her since her bed is right next to mine and I had gotten so used to her not being there. The next night, the same thing. And again and again – Shelby has been in my bedroom for almost 2 straight weeks. In fact, she spends her days in there as I see her come out of there when I get home from work. I haven’t seen her step foot in that bathroom (except for Saturday night when she was being annoying and I told her to back off – she huffed herself up and turned and walked into the bathroom with a look of disgust at me in a passive aggressive move).

So here we are…. week 6 post-amp and Shelby is 100% back to her normal albeit crazy self. Shelby’s never been a dog that subscribes to the “status quo”. She has always danced to the beat of a different drummer from her irrational fear of crates and wind chimes to her desire think she’s “Ferdinand the Bull” in kicking up her rear legs (when she had 2) in anticipation of going crazy on a squirrel way up high in a tree. Many have described her as a “special” girl (and not in the flattering way). Shelby’s antics have amused my friends on Facebook for years from she and I having to have a conversation about “boundaries” when she takes food out of my hands or mouth if I am leaning near her or our utter co-dependence on each other; from both of us having aches/pains at the same time (cue my limping after a marathon to her starting to limp out of the blue long before her leg had cancer). Shelby and I have bond unlike any I have had with any dog in my life and most likely, unlike any bond I will ever have with another. She “gets” me and I “get” her and together, I think, we make a great team. So if anyone else ever has a dog that takes to the bathroom post surgery, know that it gets better. They will come out. And before you know it, your apt/home will be filled with fluff from toys and I personally wouldn’t have it any other way.

Mom to 13 year old Shelby - Jack Russell/Shiba Inu mix. A rescue dog that was born in New Orleans. Shelby is a spirited, smart and happy little dog who loves to run, play, go to the beach (we live in LA) and ride in the car! She is my best friend and the true love of my life! View all posts by mom2shelby

3 thoughts on “From the bathroom to the bedroom”

Edit your Widgets to remove these ads, or leave them to support Tripawds.

Mom2Shelby is brought to you by Tripawds.
HOME » NEWS » BLOGS » FORUMS » CHAT » YOUR PRIVACY » RANDOM BLOG